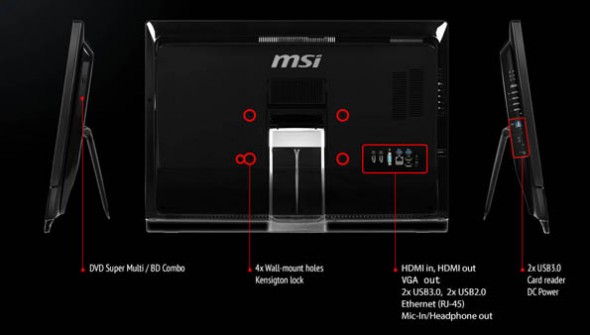 There’s nothing as comprehensive as a single unit to play games on. The early arcades did the trick and in the modern world we have laptops that can be tossed on a bed while you fire the granolas off alien heads. That’s one, and then there are all-in-one machines that have biased themselves towards the creative sphere, rather than indulge in the intricacies of a laptop that generally does not go over 21 inches in size. So, gamers, the 27-inch All-in-One Gaming PC from MSI is all set to make the wishlists of many gamers. Christened the “Wind Top AG2712”, where the 27 means obvious things. This gives MSI leverage to claim that they have the world’s first gaming PC in this size, in an AIO avatar, to their credit. Head after the jump for the specifications.


The Wind Top AG2712 will come with the powerful Core i7-3630QM quad-core processor with HyperThreading support and is clocked at 2.4GHz – boostable to 3.4GHz with Turbo. It will also offer NVIDIA GeForce GTX 670MX 3GB graphics, an additional128GB SSD installed (alongside the default 1TB hard drive), an option of a DVD-RW drive and a Blu-ray drive, an option for a touchscreen display, 2x 5W speakers with THX TruStudio Pro, 1Gbit/s Ethernet, 802.11 b/g/n, a 3-in-1 card reader, a 2 megapixel “HD” webcam, 4x USB 3.0 ports, 2x USB 2.0 ports, audio in/out and both HDMI and VGA for video. There’s no word on pricing yet.