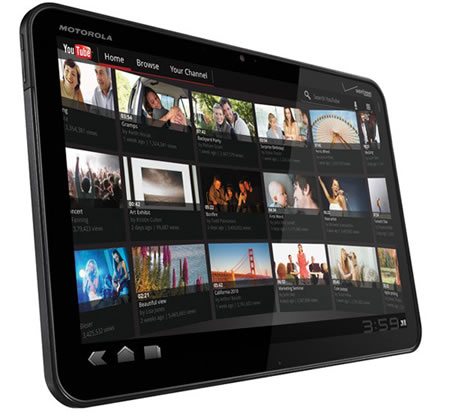 Couple of weeks ago Motorola had released a teaser video which created the anxiety bubble for its first tablet ever. To everybody’s delight, it finally lifted the wraps off its first ever tablet running on Android’s new Honeycomb OS for Verizon Wireless. Hailled as Motorola XOOM, this 10.1-inch full touchscreen device is driven by a Dual-core 1GHz processor and has full 1080p HD support with HDMI-out port. It’s a rich multimedia device owing to 5-megapixel rear camera, 2-megapixel front-facing camera for video chat, Wi-Fi and 3G capabilities and 4G LTE compatibility with external modem attachment. It is due for release in the Q1, 2011. We believe that this is Motorola’s first entry in the foray of tablets it will probably resort to competitive pricing. So until they drop in an official word about the price, we’ll just have feed on rumor updates and tipping.
[BGR]