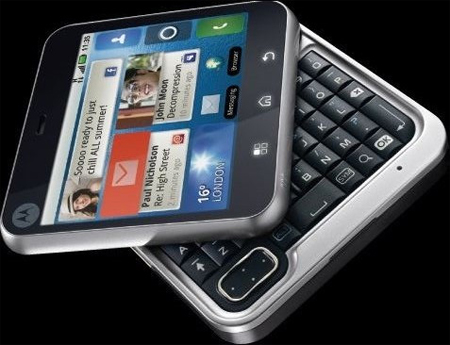 More and more handset manufacturers seem to be adopting the squared off mobile form these days. It was only recently that we saw Microsoft’s Kin One with its square display slide-down QWERTTY keypad. Motorola is also taking on the same from but they’re going with a swivel 2.8-inch display that pops up to reveal the keypad (also QWERTY). It’s been aptly named the Flipout. The handset isn’t really official announced just yet but it’s rumored to come loaded with a 700MHz CPU, GPS, a 3MP camera and run on an Android 2.1 OS with the MOTOBLUR UI. It’ll also be available in three funky colors. We’ll have to wait a bit till all specs are revealed and more importantly what it’s going to be priced at and where and when it’s going to be launched.
Electronista