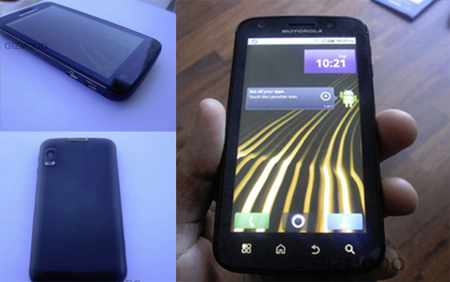 It’s getting harder to keep track of Motorola’s latest devices. There seems to be a new one announced almost on a monthly basis. The latest rumours were of the Olympus which I had initially presumed would be another tie up with a camera manufacturer like Motorola had with Kodak a year and more ago. That’s not the case. The Motorola Olympus aka theMB860, aims at being a serious powerhouse of an Android handset and will be equipped with all kinds of goodies including a Tegra 2 processor. It’s definitely going to be at their booth at CES 2011 and lucky attendees will get a chance to marvel at it its slick but plain looks and speedy functionality. It’s rumoured to have a 4-inch touchscreen, front and rear cameras (no word on the resolution), HDMI-out and although prototypes have been running Froyo, it’s quite possible come launch, Moto will up that to 2.3. Motorola’s BLUR UI will also be part of the deal. Bring it on Moto!
Electricpig