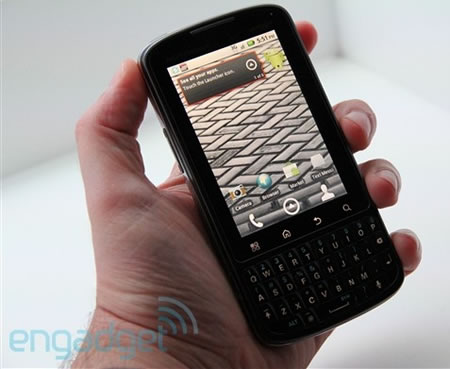 Now Android hasn’t really been an OS for the hardcore business users. Let’s face it; it’s really designed around social networking although it does have quite a few business-friendly tools as well. Motorola is going to town with their Droid rage of Android devices as a new one is out called the Moto Droid Pro that has incorporated a new look around Android. They’ve decided that the slide out QWERTY is just not what the business guys want so out came the candy bar form with a QWERTY keypad. It looks similar to Palm Pixie doesn’t it? The Droid Pro is loaded up with a 1GHz OMAP 3620 processor with an MDM6600 chipset, 512MB of memory and 2GB of onboard storage (very handy). It also features 3G, Wi-Fi and Bluetooth 2.1.

The autofocus camera comes with a dual LED flash to brighten up those otherwise dull picture settings. Some additional functions include push functionality for MOTOBlur (just a simpler version of the interface) supports SD card remote wipes and will also come with full device encryption. That’s quite a bundle. There aren’t too many Android devices with this form and who knows, it just might catch on.
[Engadget]