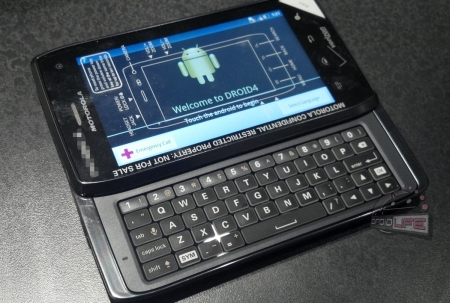 While Motorola fans might be still drooling over their anorexic Droid RAZR baby, the folks at Droid Life have scored on some real neat shots of their upcoming handset in the works- the DROID4. From the images and leaked specs alone, we hear some tech pundits are billing this one as the best slider smartphone till date. There is 4G LTE support here with Android 2.3.5 OS, full 5-row “illuminated” keyboard, 1080p video recording, non-removable battery, HDMI out and MotoACTV syncing.

The screen here stands at 4-inches but we don’t know if going to be from the Super AMOLED category at the moment. Nobody knows what the processor is going to be like, but most are expecting this one to follow the RAZR suit and probably sport something similar to 1.2GHz dual-core OMAP4430 processor. The glamour shots here do hint at 2011 release but there is yet to be a confirmed word for that one. Other than this, we don’t know how much it is going to cost either.