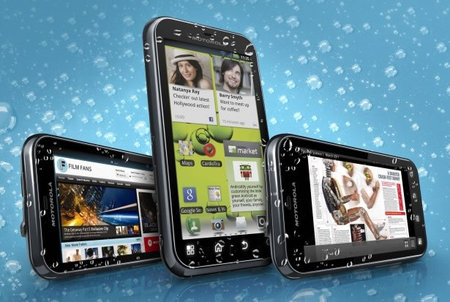 Motorola mobility has finally handed over its fate to Google yesterday and we cannot wait to see what this acquisition holds for the growing bubble of smartphones and tablets. Motorola has unveiled the Defy +, which is touted to be the rugged smartphone based on Google Android 2.3 Gingerbread OS and driven by a 1 GHz processor. The ‘rugged’ feature here doesn’t mean that you can practically beat this thing up, but it stands impressive owing to ability to resist damage from water, scratches and dust.

Hardware specs include 3.7-inch display touchscreen built with Corning Gorilla Glass, a 1700 mAh power source promising, 7.1 hours of talk time and 17 days of standby timeGB of internal storage, expandable to 32GB; support for Adobe Flash Player 10 for multimedia consumption; and a 5MP camera with flash, digital zoom and auto focus. Pricing bears a TBA status but we know that the handset will arrive in Europe, Asia and Latin America this fall. Motorola also did a fine job with its rugged segment when it unveiled Motorola i1 on Sprint’s network more than a year ago which was then followed by Titanium Device in June for the same carrier again in this June.