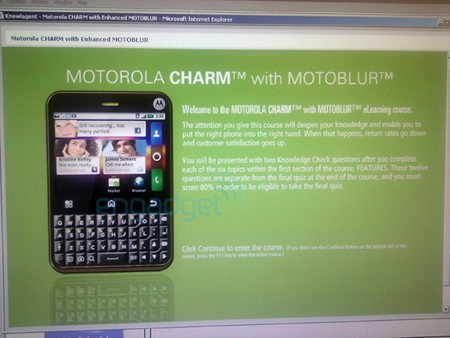 I’m not a fan of the square mobiles, there’s just something… square about them. Motorola’s Flip Out Android device, although a great concept, I’ll admit didn’t do it for me either. It’s been leaked that they have another Squared-off Android device in the woks that’s apparently heading for T-Mobile. The Charm will avail of the Android 2.1 OS and Motoblur,, Motorola’s social networking UI is also evident on the leaked images. There’s not much more mentioned about the handset or its specs. The images show just a QWERTY keypad, what looks like a 2.6-inch or a 2.8-inch touchscreen (I’m assuming since there aren’t any navigation keys) display and three touch sensitive buttons. The word is though, that the Charm will actually feature an enhanced version of the Motoblur UI.
Engadget