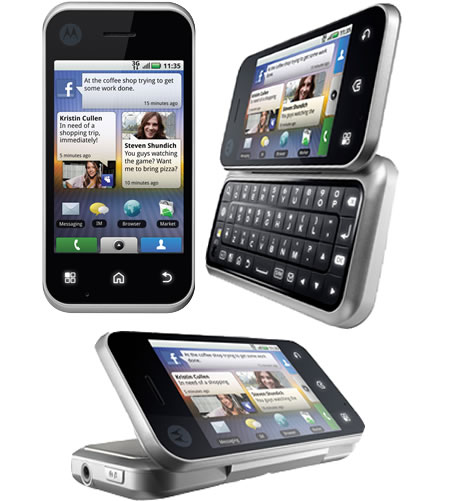 Moto is on a roll with mobile devices that seem to be getting better and better. At this years CES they’ve announced yet another handset that’s equipped with a QWERTY keyboard, only this one doesn’t slide out from behind the display, no no no. The handset is called the Backflip and that should pretty much give you an idea on where the keyboard is located and where how to ‘bring it about’. Equipped with Motorola’s Motoblur social networking UI the aptly named Backflip Android v1.5 powered device also comes with a 3.1-inch HVGA touchscreen, 5MP shooter with an LED flash and a 3.5mm handsfree jack. Designed for the North American, Latin American, European and Asian markets the Backflip is due out sometime in the beginning in Q1 of this year, but so far there’s no pricing on it just yet.
[Motorola]