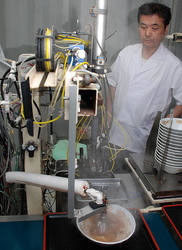 There’s a cool robot, somewhere in Yamanashi, that’s got one hellava task – making noodles! The robot was created by Yoshihira Uchida, 60, who owns the eatery. The robot is capable of satisfying the needs of customers and putting up with their whims and fancies as far as the ingredients in the soup are concerned. The maker says that it can conjure 40 million recipes that have varying quantities of individual ingredients like the amount of soy sauce, salt and other factors. The noodles are cooked by a cook and are then mixed with the superior soup that’s prepared by the robot. I wonder if Kung-Fu Panda could get away from his kitchen duties more easily with this one around. The whole process is said to take a mere 2 minutes!