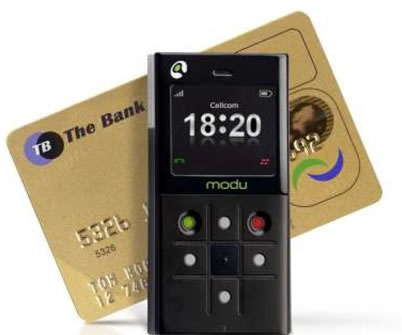 The man who invented the ubiquitous USB flash drive has now come up with a concept that he says would “change the cellular market”: A tiny cell phone that pops into interchangeable “jackets” so that consumers can cheaply transform them into bigger, smarter phones as a messaging device, a music player or a gaming device – or even into other gadgets to connect them to the Internet. Dav Moran, founder of the Israeli company Modu, announced Thursday that it will launch the phone, also called Modu, in October in three countries – Italy, Russia and Israel. The Modu is slightly smaller than the current iPod Nano and weighs 42 gms. It has a small color screen and a limited keypad, which allows it to work as a rudimentary cell phone on its own. The jackets that will come with the Modu look like cell phones, with standard numeric keypads and other features like cameras. But they lack the antenna and chips that communicate with a wireless network. This is where Modu comes in – it pops into a slot, turning the jacket into a fully functional phone. Moran said the Italian carrier is excited about the concept because it can make cell phones more like fashion; tempting consumer to update their looks every few months. The jacket is cheap to make, has almost no electronics, and doesn’t need to be tested to see that it conforms to its network standards.

Although Modu supports only GPRS now, Moran said the company is working on upgrading it to full 3G compatibility. And yes, he added that an upgraded Modu would work with jackets and mates designed for the first-generation unit. This tiny cell phone that will retail for around $280.
Source