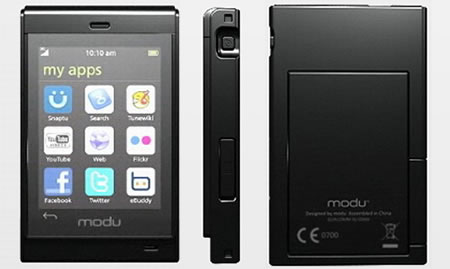 Modu is out with what their calling the “The Lightest 3.5G Touch Phone in the World” that’s running on Brew, the modu T. This is the company’s very first touchscreen handset that features a 2.2-inch display, GPS, FM radio, 2GB or internal memory and support for expansion via microSD cards, and it’s fully compatible with their ‘fy’ add-ons. Just in case you’re unfamiliar with this concept, it means you can add features to this device like a 5MP camera, add sports kits to it for the exercise fans, and even throw on a QWERTY keypad. That’s the beauty of the modu device. This one also comes with Facebook and other social networking options making it quite a versatile little phone. The price hasn’t yet been announced but it’s due out in little while in a few countries.
Via – [Gizmodiva]