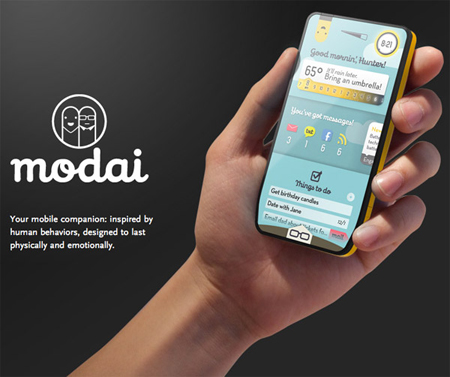 Modai Phone concept gets as human as a phone can get

Among the things you had hoped for in future is the fact that we are going more dependant with every demand. The Modai Concept Phone is one such device that gets the human out of you and into your phone. It has two modes for social and official purposes, called Fundai and Prodai, respectively. Two screens can be switched using a convenient mechanism. This is to separate tools and functions at a go. The phone has been built to form an emotional bond with the owner. Almost human you may wonder.

The phone is personified by an avatar that describes the battery used and so on. From gently waking you up to upgradable aspects the Modai may actually work.
Technabob