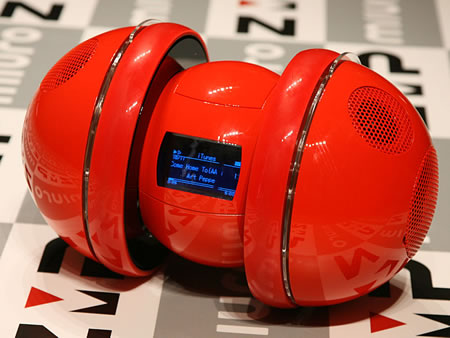 Ok we went a little overboard for the title, but seriously the Miuro from ZMP is the most advanced iPod dock every made. It is a 14-inch wide, egg-shaped device that can either play tunes from your docked ‘iPod’ or wirelessly via WLAN through its built in Kenwood speakers. It supports WAV, MP3, WMA, AAC, AIFF and LPCM formats. The speaker section with double wall shell construction prevents vibrations, resonance sound and noise to deliver rich, pure sound. Miuro is available in white, black, yellow, or red. The OLED display in the centre can display music track, time, artist’s name, net radio connection etc. It comes with a remote control using which you can control its movement it has two wheels, an acceleration sensor and a Gyroscope. So no need to carry the music around the music follows you.
(Videos of the Miuro in action after the jump)

Its battery lasts for 3 to 4 hours and unlike the Aibo it does not charge itself. It can take pictures with the built in camera and transmit them wirelessly. The Miuro weighs around 3kg and will hit stores in Japan by December for a hefty 100,000 Yen ($ 930).
Video 1