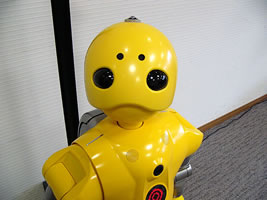 The Wakamaru from Mitsubishi Heavy Electrics is 1 meter tall, 48 cms wide and weighs around 27 kgs, however it does not have feet but it moves on wheels. It connects to the internet via WiFi, and can convey emails and also download the latest weather information and announce to the user. It has two arms but no grip however it has sensors in it’s arms which can detect touch and it reacts accordingly. An all directional camera with an infrared sensor is located on the vetex. The infrared sensors rotate at 360 degrees and upon detecting a human it focuses the camera for face recognition. It can recognize the owner and 10 other persons. When connected to the Internet, Wakamaru will photograph and transmit the image of person on request of the owner. It has speech recognition with “acoustic canceler” which eliminates the live environment sounds. When it runs out on battery it automatically charges itself from the charge station, with a full charge it can function for 2 hours. The Wakamaru will go on sale from September 16th for 1,575,000 Yen ($ 14,250) only 100 pieces will be for sale.