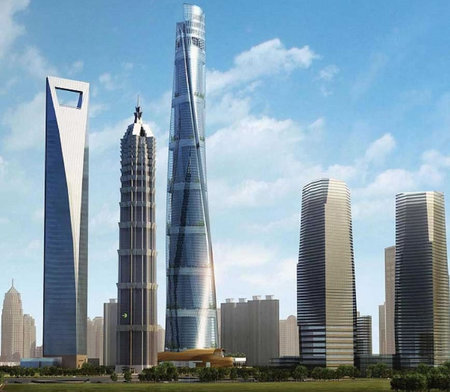 Mitsubishi Electric has received an order from Shanghai Tower Construction & Development Co.,for the installation of the world’s fastest elevators, travelling at 18 meters (or 59 feet) per second, in the Shanghai Tower currently under construction in the Pudong district of Shanghai, China. Three sets of elevators will travel directly between the second basement level and the observation deck on the 119th floor. Including these three units, Mitsubishi Electric Group will supply all 106 elevators for the Shanghai Tower, beginning this autumn. The 632-meter tall skyscraper complex will house offices, hotel accommodations, commercial facilities, convention halls, exhibition halls, restaurants and culture and tourism facilities. It is expected to be the tallest building in China when completed in 2014. The current world record for elevator speed is 1,010 meters per minute, which is approximately 16.8 meters (or 55 feet) per second, according to Guinness World Records.

Mitsubishi Electric also will install a group of four double-deck elevators that will travel at a world-record 10 meters (or 33 feet) per second between the ground floor and hotel lobby on the 101st floor. In addition, the emergency elevator is expected to become the world’s longest-travelling elevator by operating between the third basement and the 121st floor, a distance of 578.5 meters. High-intensity ropes and cables will enable the world’s longest-travelling elevator to operate over a distance exceeding 500 meters. Ceramic braking material will increase resistance to high temperatures and strong impact for maximized safety and reliability. All elevators capable of travelling at speeds in excess of 2.5 meters (or 8.2 feet) per second also will be equipped with energy-saving solutions, including regenerative converters and group-control systems.