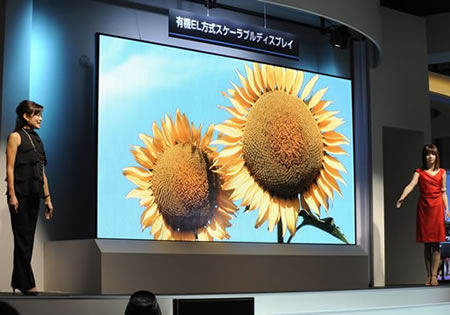 Mitsubishi is on a roll with their cool OLED TV that spans a total of 155 inches in size and is made of smaller OLED parts. The damn thing’s so big that it looks down on those flashy LCD TVs that look up to this mammoth standing three times as big as them. The modular design of the screen allows it to grow larger and larger so as to match the resolution of the image. There’s a claim that the screen can cover an entire city! It has a total of 720 10-centimeter square panels.

So far, all we know is that the screen is called the Diamond Vision OLED screen. We’re waiting for more on this one.
[OLED-Display]