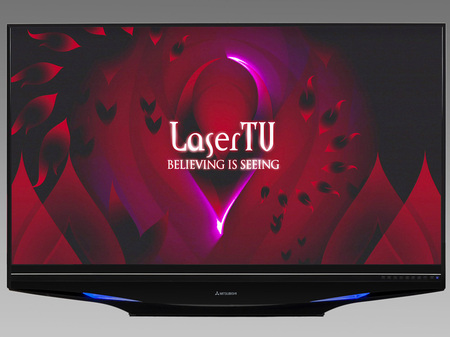 LCD TV’s were the past, OLED TV’s are the present and Laser TV’s will be the future. Mitsubishi Japan has already developed an experimental 65 inch Laser TV which uses 3 color Laser for illumination. The experimental model is rather thick at 10 inches (app 25.4 cms), surely the end when goes commercial will be much thinner. To make use of Laser technology ‘super wide angular optical engine’ has been developed which miniaturizes the optical system. The TV can be hung up on the wall thanks to a thin screen and frame structure coupled with a small external power adapter. Mitsubishi claims the Laser TV offers a contrast ratio and colors spectrum which is double of current LCD and Plasma TV’s. The TV is not only capable of delivering the ultimate picture quality but is also capable of delivering a true 3D experience. Detailed specifications and other details are kept under the wraps, however Mitsubishi is promising to release the new tech TV’s in North America this year itself.
(One more image after the jump)