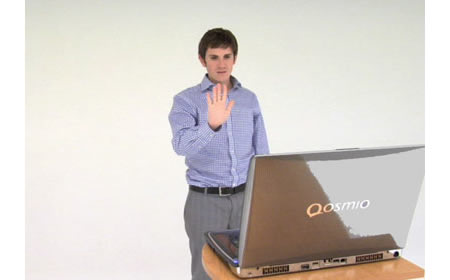 Computer makers seem bored of the humble mouse as an interface for the PC. New announcements from Microsoft’s Surface and Apple’s success with the multi-touch interface of the iPhone don’t help either. A small group of researchers are coming up with the ultimate interface between man and machine, the touch less technology also called gesture based interaction is not new, but what’s amazing is that this technology is being developed by the guy who suggested the eye popping precog terminal to Steven Spielberg while working on minority report. John Underkoffler, a graduate of the Massachusetts Institute of Technology’s Media Lab has already founded a firm to bring gesture-recognition computing into the real world. Underkoffler’s former professor at MIT, Hiroshi Oshii, says Underkoffler is working on a system of gloves and cameras that allow just the sort of ethereal interface that Spielberg imagines and that he has spoken with major tech firms about licensing the technology. Well that’s not so new if you have played the EyeToy on the PS2 and Xbox’s Live Vision. Those cameras integrate players’ movements, allowing an onscreen avatar to mimic arm gestures or walking motions. If one can get 90% of applications like e-mail or checking stocks or the weather through simple gestures, everything starts to meld into a single display like a digital photo frame. The desktop is cleared off and all the extra pieces are eliminated. Furthermore there is research done on headsets that allow computers to be controlled with thought alone. Yep! This is not a sci-fi claim, this technology does exist today. Gaming hardware makers like OCZ Technologies, Neurosky, and Emotiv offer gadgets that wrap around users’ heads to read electrical impulses. OCZ describes its Neural Impulse Actuator, a headband with three sensors, as capable of allowing full control of a video game. On a more extreme note researchers have gone ahead and put aspirin-sized electrodes directly on a subject’s cortex. The person (or animal) can then control games and other software programs just by thinking. Don’t forget the monkey that controls a robotic arm to eat

There are also gaze trackers which are 14% more faster than a normal mouse but just don’t look at the recycle bin that often you may end up losing all your work because of its 2% error rate. Of course let’s not forget that new technology does not come cheap, how about shelling out $25,000 for that new mouse? Chump change anyone?
Source