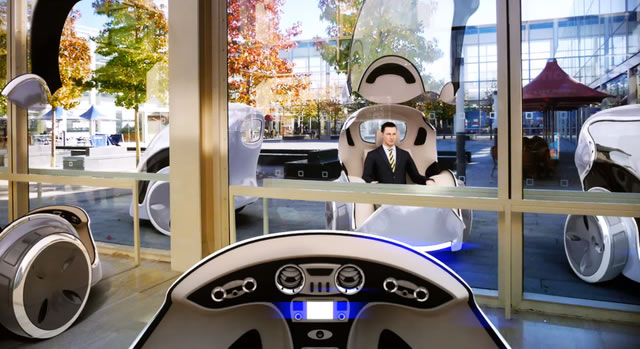 The driverless vehicle is probably a notion dreamed up even by early man the moment he realized he would have to control his finest creation, the wheel. But a vehicle like this has been the stuff of sci-fi legend and cars like K.I.T.T. have influenced the cars of today. We’ve already heard about Mercedes and Honda and the tech they’re working on in this field so we know that this type of sit-back-and-enjoy-the-ride technology is very much on its way. But for the people in a little British town called Milton Keynes, 2015 will usher in a new age of transport and commuting. UK’s business secretary Vince Cable announced that by 2015, a fleet of 20 driverless ‘pods’ capable of seating two, will be made available to the townspeople.


These ‘pods’ will even have their own special track, which means no traffic. On the downside, they’ll only able to reach speeds of up to 19 km/h. in 2017, it’s estimated that around 100 of these pods will be unleashed on the public, but by then, I’m sure we’ll see competitors pushing the envelope a little further. Built-in sensors will guide the vehicles along their merry way and prevent them from bumping into pedestrians or other pods. Think of these as those little motorized carts that old people use to get around, only more roomier, self driving and is naturally, much sleeker. One report says that these pods will be a sort of ‘shuttle’ service between the railways station and the supermarket (20 minutes away) to start off with. The fare would be about $3.20 (£2).The cost of this project is estimated at $2.4 million which doesn’t sound too bad.

Although there are no official specifications released yet about these vehicles, a very cool video (below) gives us an idea of what to expect. Features would be similar to what you’d expect from a normal vehicle, but one of the future, which could include internet connectivity with a large(ish) display that would allow you to play music, watch videos etc. Back in 2009, we covered the driverless taxi service that was started off at Heathrow Airport that ran on a specific track and would able to carry at least four passengers around the airport. We also know that Google is testing driverless vehicles and that Abu Dhabi will working on options of their own. So any way you look at it, the driverless vehicle is coming – either you get out of the way or jump on board.