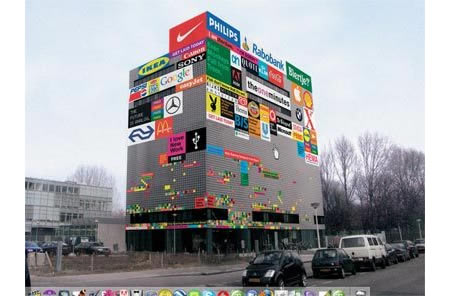 Well the Milliondollarhomepage conceived by the 20 year old minipreneur has not gone offline but is starting to make its presence felt in the real world as well. In case you just woke up the site is a visual bombardment of advertising pixels on one page. The idea has earned its creator over a million dollars in advertising sales. Now the concept has been applied to a building developed by the Sandberg Institute (Netherlands). With big sponsors like Google, MCDonalds, Google, Nike, Sony, Canon, etc taking space on the thing the offline concept also seems to be a hit.

The website has become so popular that its 20 year old owner Alex Tew has made it to the Wired Magazine.
Source