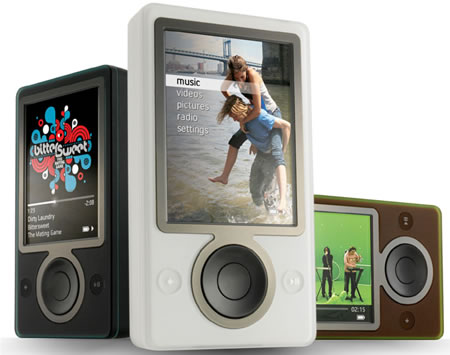 The Zune player from Microsoft is finally out. It features a 30GB hard drive and can store 7,500 songs, 25,000 pictures or 100 hours of video. The digital media player has a bright and crisp 3 inch screen and comes complete with FM tuner and Wi-Fi connectivity for friends and family to share files. The wireless networking connects your Zune to other Zunes, letting you share “full-length sample tracks of select songs”, your recordings, your playlists and your pictures with others. You can listen to a track from another person for up to three days, after which you’ll have to buy it from the Zune Marketplace store—their official name for the store. It will come pre-loaded with songs from smaller record labels and videos as well. Songs can be downloaded from Zunes marketplace as per song purchase plan or Zune Pass subscription to download as many songs as you want for a flat fee—like Napster.
(Videos of UI and file sharing after the jump)

Some accessories for the Zune are Zune Home A/V pack, Car pack and Travel pack. Microsoft is working with other manufacturers like Altec Lansing, Belkin, Griffin, harman Kardon, JBL and more to make additional accessories. Zune will be available in three colors black, white and brown. Pricing and availability of the Zune is not known yet.