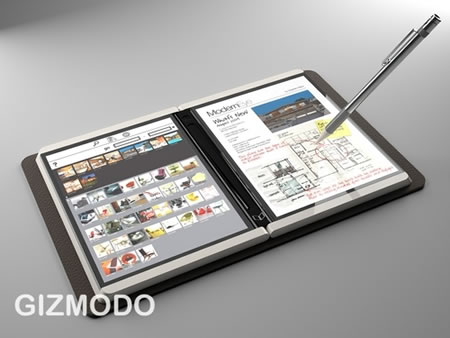 ‘The courier, the courier, he’s a brave romantic man…’ Well those lines bear little but some context to what Microsoft have unleashed upon the masses. It’s a secret revelation called ‘the Courier’. Yes, it has its share of romance as it brings forth some great specs that spread smiles on our faces and that too, with gorgeous looks. Though some may still whine about it being in its prototype days, the tablet looks as promising as ever with dual 7 inch multi-touch display screens that connect with a hinge that make it look like an opened up digital book. It seems to be a welcome gesture for artists and designers who may use the multitouch and other features for a fluid tablet experience.

Since it is after all a prototype, there isn’t much we can look forward to in this sector. However, there is always a glimmer of hope the moment Microsoft shift from their secretive stance.
[Wired]