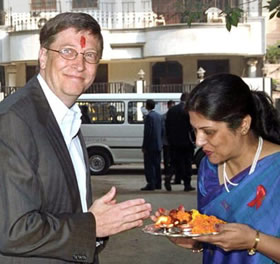 Like China, software piracy is rampant in india as well, you can easily get a pirated copy of Windows 7 on the streets for less then $2. To protect its intellectual property, Microsoft recently sued 4 software pirates in India and filed a suit against them in New Delhi. But the Delhi court fined the Redmond giant, after it found out that the cases the company had initiated in India’s capital were related to alleged copyright infringements that occurred in Bangalore, Hyderabad, Chandigarh and Mumbai. According to the court Microsoft used its unlimited cash as a power tool to hurt the defendants, who would have to travel across the country to defend themselves. The court says Microsoft decided to file a case in Delhi because the High Court can order compensation up to $40,000 for the alleged crimes.

In addition to this the court left the accused off the hook and ordered Microsoft to pay $4000 each to the four defendants. Although it was not illegal for Microsoft to file the four cases in the national capital where the company is headquartered, the Court found that something had to be done to prevent shear abuse of power by the software giant.