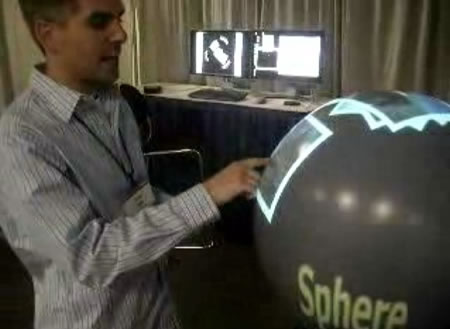 After months of rumors, Microsoft researchers are taking the wraps off a prototype that uses an internal projection and vision system to bring a spherical computer display to life. People can touch the surface with multiple fingers and hands to manipulate photos, play games, spin a virtual globe, or watch 360-degree videos. Sphere is a cousin of the Microsoft Surface tabletop computer, already being used in retail and hospitality settings. Microsoft researchers made numerous enhancements and developed specialized software. A small demonstration of a pong like game has also been thrown in to get our minds thinking in spherical dimensions.
Update – Video after the jump. I love the dark side idea.

Microsoft researchers are interested in seeing how people will interact with the Sphere apart from being just a technological experiment. Sphere uses advanced algorithms to translate images originally intended for a flat computer screen so that they appear properly on the rounded globe, on the fly.