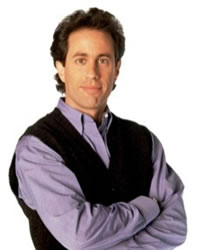 Microsoft recruits Seinfeld to combat Get a Mac ads

I love the “Get a Mac” ads and simple rolled over laughing when I spotted couple of them on our pages. In a bid to out do Mac, Bill Gates or rather Microsoft has roped in Jerry Seinfeld and of course Bill to propagate the wonders of Vista and the ilk. The $300 million campaign sets aside $10 million for “key celebrity pitchmen”. The ads are said to focus on of “Windows, Not Walls,” stressing the need to “break down barriers that prevent people and ideas from connecting.” The campaign will probably milk the Mojave Experiment as well, where Microsoft made unsuspecting users teats a new product that was in fact the Vista.
Source