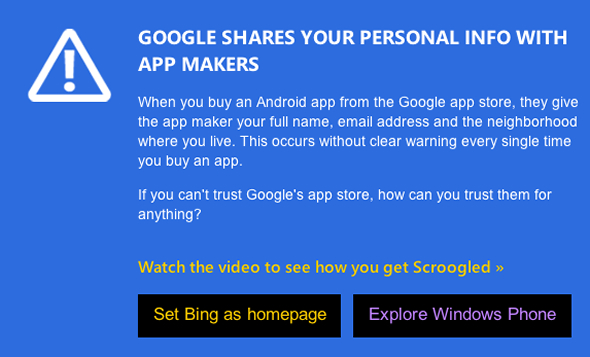 Microsoft back with the “Scroogled” Ads targeting Google Play Store

You might have heard of the Scroogled campaign launched by Microsoft last year that took a gibe at Google, well its back. Microsoft released a series of ads targeting the Google Play Store. In the latest ads Microsoft is trying to scare away Play store users highlighting the privacy concerns — its policy of sharing your name, email, and general neighbourhood location with developers from around the world. In the videos, Microsoft says, “If you can’t trust their app store, maybe you can’t trust them for anything.”


The timing of the ads is interesting; Microsoft also filed a complaint with the European Commission over concerns that Google could be using Android to strong-arm manufacturers into only using Google services. All this makes Microsoft look like a grumpy kid bellyaching. The ads and the complaint, both, are baseless and weak. #Roidrage social campaign by Microsoft that took on Android backfired and it won’t be surprising if something similar happens this time. It’s already facing quite a bit of flak for the phoney ads on social media.