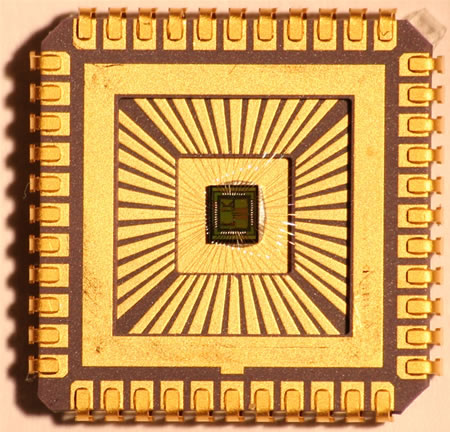 Micro-chips that recharge themselves on ambient energy

Microchips are increasingly being used into more devices and for a multitude of tasks from medical in the form of pacemakers to the military as tiny surveillance bugs. Researchers are conceptualizing on implantable medical devices such as pacemakers and health monitors using the new chip could be powered indefinitely by a person’s body heat or motion without the need for a battery. At the very least, however, the researchers say the new technology could lead to cell phones, handheld computers, and remote sensors that last far longer when running from a battery. The key to the improvement in energy efficiency was finding ways to make the circuits on the chip work at a voltage level much lower than usual. While most current chips operate at around 1.0 volt, the new design works at just 0.3 volts. One key to the new chip design was to build a high-efficiency DC-to-DC converter—which reduces the voltage to the lower level—right on the same chip, reducing the number of separate components. The redesigned memory and logic, along with the DC-to-DC converter, are all integrated to realize a complete system-on-a-chip solution.

A variety of military applications can be imagined in the production of tiny bug like, self-contained sensor networks that could be dispersed in a battlefield (the research was funded in part by a grant from the U.S. Defense Advanced Research Projects Agency).
Source