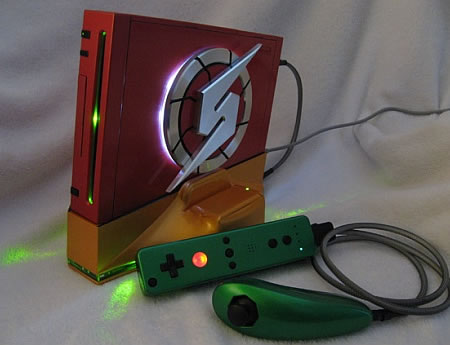 Charity begins at home they say, and what better way than getting yourself this totally cool modified Wii console. The Metroid Wii Mod has been done up by Ramon, of the God of War PSP mod fame, and as is the norm 15% of the selling price will go to Penny Arcade’s Child’s Play charity. See I told you its good to be charitable, in return for your favor you can become the proud owner of this piece, which is up on sale on eBay. The mod Wii sports custom-made Samus Aran emblem and the case mod integrate a Wiimote charger in its light up stand.

The Wii disc slot glows green in imitation of Samus’s visor; even the Wiimote and Nunchuk are painted the metallic green of Samus’s arm cannon.
Ebay via Joystiq