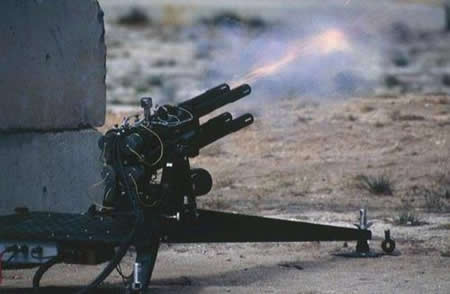 Metal Storm – Area Denial Weapon System (ADWS) is currently being developed by Australia with significant interest being shown by the US government. Metal Storm technology is an electronically initiated, stacked projectile system that removes the mechanisms required to fire a conventional weapon. Effectively, the only parts that move in Metal Storm’s technology are the projectiles contained within the barrels. Multiple projectiles are stacked in a barrel. The technology allows each projectile to be fired sequentially from the barrel. The rate of fire of each pod varies from single shots to ultra-rapid rates of 6000 rounds per minute. The pod can be mounted almost anywhere and be programmed to shoot at anything that moves in a specific area thus giving the name Area Denial Weapon System. Multiple weapons pods can be networked and linked to a command and control station.
(Video after the jump)