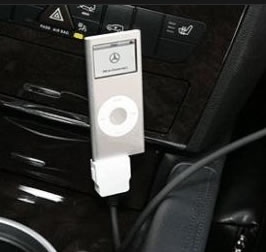 After their split with the Chrysler Group, Mercedes-Benz has named Hughes Telematics as their partner for all future models. For the moment Hughes confirmed that its service is scheduled to replace Mercedes’ current Tele Aid system in late 2009, but other than this no other detail is known. However, this juicy bit of info has slipped out that the new telematics service will include all the emergency and roadside assistance features associated with GM’s OnStar service. There will also be some advanced entertainment, connectivity, and diagnostic services onboard too. Sounding like a similar arrangement to Ford’s new Sync system, the Hughes service will include “voice control of iPods and cell phones.”

The new system onboard the Merc will allow drivers to remotely download software and update navigation information and search the internet. It will also come with an optional tracking system for informing parents of their teen driver’s activities. Following its recent update to the COMAND system, this one more endeavor on behalf of Mercedes to upgrade their in-cabin facilities.
Source