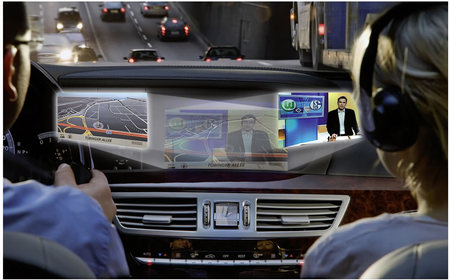 Mercedes-Benz will roll out its new Splitview technology on the S-Class. The technology will allow the driver and front passenger to watch different programs, such as the navigation system and a DVD, on the same screen at the same time. The German automaker said it developed the technology with auto supplier Bosch. In its latest system called Splitview Technology, drivers are able to navigate the brand’s COMAND central computer system while at the same time and on the same screen, front passengers can watch TV or a DVD. Engineers developed a centrally located 8-in. screen capable of dual image display by placing TF-LCD pixels adjacent to each other. A filter then divides the pixels in a fashion allowing each passenger to view their given portion — meaning the driver can follow a navigation map while his passenger can check out the latest Hollywood flick with wireless headphones that ensure neither gets distracted.

Mercedes will first offer Splitview on the 2010 S-Class next summer, with other models likely adopting the technology in the months following.
[EMercedesBenz]
Press release.
Innovative SPLITVIEW technology: Mercedes-Benz S-Class: two programmes on a screen
Stuttgart – In future Mercedes-Benz is equipping its luxury class models as the first premium brand with a display screen that allows the driver and front passenger to view two different programmes at the same time. While the driver is checking the navigation instructions, the front passenger can sit back and watch a film on the very same display. This is made possible by new SPLITVIEW technology which the Stuttgart premium brand is introducing in the S-Class for the first time.
Mercedes-Benz has integrated the new SPLITVIEW technology developed by Mercedes-Benz and Bosch into the innovative control and display system COMAND, which is centrally located in the dashboard console. Its generously dimensioned, 8-inch (approx. 20 mm) monitor shows a backlighted active matrix colour display (TFT-LCD). This shows two different images simultaneously by placing pixels adjacent to each other. A filter masking the display divides this mixed image in such a way that depending on the seating position, only the pixels making up one or the other image can be seen. As a result, the driver and front passenger can view different programmes on the same screen at the same time.
The driver still has access to all the information from the control and display system COMAND on the display, while the front passenger uses the remote control to choose his own entertainment programme with DVDs, TV channels or music videos. To avoid distracting the driver with his entertainment programme, he also has the option of enjoying the programme via headphones. As before, the driver is able to view all the information provided by the COMAND system on the display.
Mercedes-Benz is introducing the new SPLITVIEW technology in the S-Class for the first time in summer 2009.
Copyright © 2008, Daimler AG