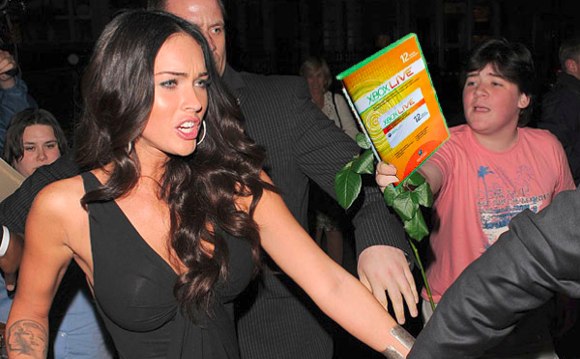 Call of Duty ads have been known for showcasing big talent the likes of which include Kobe Bryant (?!) and Jimmy Kimmel for Balck Ops, Mordern Warfare 3 that showcased the talents of Jonah Hill and Sam Worthington and Black Ops II which features Iron Man Robert Downey Jr. Their ads are so crazy, start studded and more importantly, effective in garnering attention for their new games, that they even won CMO of Activision, Tom Ellis, 2013’s Grand Effie and Adweek’s Brand Genius award. Is that accolade or what!

But what’s sure to get the hearts of all the male gamers pumping is the upcoming ad for Call Of Duty:Ghosts that will star none other than the sultry siren of the screen, the sizzling robot-butt kicking beauty Megan Fox. Although the ad will only air officially in a couple of days i.e. Nov 02nd during Saturday Night Live in the US, reports say that her 10 second onscreen appearance is still gun-barrel-smoking hot. Although women have been featured in the various COD ads, Fox the very first female starlet to make the cut so it kind of is a big deal. Shooting robots out of the sky to the tune of the legend that is Frank Sinatra’s I’m Going to Live Till I Die, Fox pretty much embodies the “there’s a soldier in all of us,” tag line. While each of the games will always be more epic then the one that came before, this ad might will probably the best they’ve done so far too.