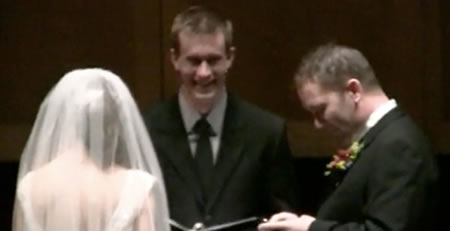 Meet a guy who updates his Facebook profile, on the altar!

‘Mr. XYZ, do you take ABC as your wife?’
‘Yes, I do’ (he flips open his phone and updates his relationship status, probably not giving a rats a** at her pouting lips). Well, it hurts like hell, thought it isn’t really visible in this clip, we can well imagine the replications of this piece of shock, making its way to a dozen gizmo blogs. Some may herald him as the ultimate geek of all time while others may simply speculate that he got married for the darn sake of getting another chick jealous, and Facebook was the only way he could get the message across. What’s even better is that the wife follows suit and the preacher surely doesn’t mind it from the looks of it.

I wonder is this is what we’re going to see next.
‘Mr. XYZ, do you take ABC as your wife?’
‘Wait, let me take this quiz on Facebook and see if she’s worth it.’
[Switched]