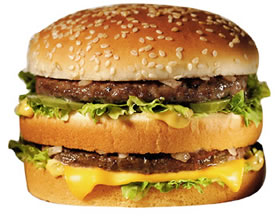 McDonalds to launch World cup burger the biggest ever

This is the first non tech write up on this site, but hey it is related to one of the greatest sporting event – The Fifa World Cup. Fast food major McDonalds is hoping to cash in on the Football fever as it prepares to launch the World cup burger. The special burger will be available for six weeks and will be around 40 % larger than it’s biggest burger the Big Mac. So after relishing it you will be left with 667 additional calories which is equivalent of 9 fun sized Snickers bars. The move has prompted outrage from health campaigners with Liberal Democrat MP Steve Webb orgainising a petition against the burger.
Thanks Mark