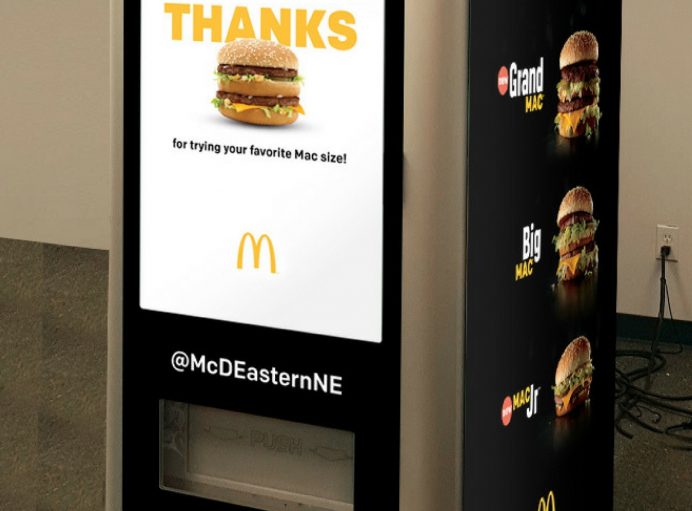 Pizza ATMs, cupcake ATMs, and now – burger ATMs! The future of fast food has arrived. At Kenmore Square in Boston, the McDonald’s served Big Macs at no cost, via the ‘Big Mac ATM’. This fascinating one-day activity took place on January 31, 2017, from 11 a.m. to 2 p.m., marking the launch celebration of McDonald’s two new Big Mac sizes that Mac lovers sampled for free. McDonald’s stated that these big new burger sizes are for those customers who’ve been wanting a ‘Big Mac’ for a while now.

However, instead of paying cash for the burger, customers had to key in their respective Twitter handles on the machine’s touchscreen, following which, the machine sent out a promotional tweet reading “Check out the new Big Mac” from the customers’ Twitter accounts. Dispensed immediately was the reward – a free Big Mac, either the small single-patty Mac Jr. or the larger 1/3-pound Grand Mac, both served with onions, lettuce, pickles, American cheese and the Big Mac sauce. 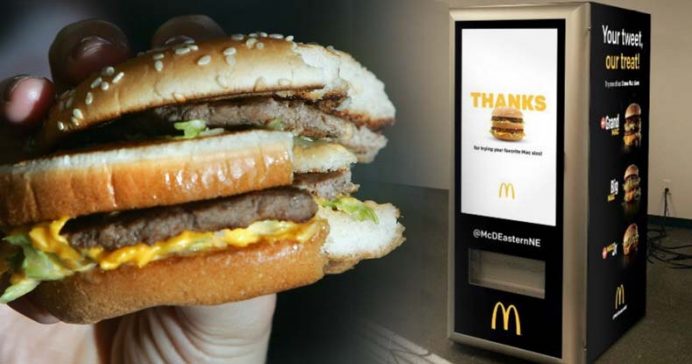 Victor Spadea, McDonald’s franchisee, affirmed that this is a unique way to promote customer-company engagement. Spadea stated in an interview that this is a “Fun way to be modern and progressive.” He went on to elaborate how the machine worked. The burgers were freshly prepared on-site at a McDonald’s close by, then loaded immediately into the heated machine, which kept being refilled continuously to ensure top quality.

This marks a second when it comes to automated ordering at McDonald’s. In 2015, they introduced touch-screen kiosks through which customers could place their orders, but they still had to pick it up from an actual person. The Big Mac ATM however required zero human interaction.

Nevertheless, McDonald’s Big Mac ATM is more a marketing gimmick and less an indication of future ‘human-free’ restaurants. The company has not spoken about any plans of further exploring this technology in the near future.