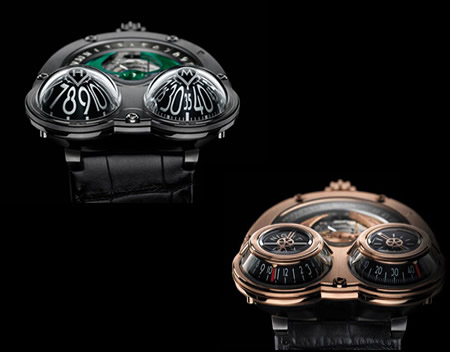 Maximilian Busser’s Frog watch, designed to bring a child’s sense of awe and sense of playfulness to your wrist

I am so loving the new watch designers these days. They’re whacky, insane, technology advanced, wallet shrinking and they yet maintain a demeanour of elegance about them. And the best part is, as weird as some may be, they do tell time. The latest is this awesome design from watchmaker Maximilian Busser. It’s been designed by Horological Machine Number 3 and Busser and is called the Frog. They’re saying its shape and style is designed to “bring a child’s sense of awe and sense of playfulness” to a those who so cast their eyes upon it. Now the reason it’s called the Frog is because of the two large, bulging bubble- like domes that are used to indicate hours and minutes. The domes are made of sapphire crystal so no scratch is going to occur here.

The design possibly met with such astounding comments and jaw drops that a variant is also is also going to be available in more elegant setting but the domes seem to have been flattened out at the top. The second model is called the HM3 and there are no prices talked about just yet. Of course I don’t expect them to be cheap considering the brand, materials and style, so as much as I love the design, i can’t afford either… yet.
Dvice