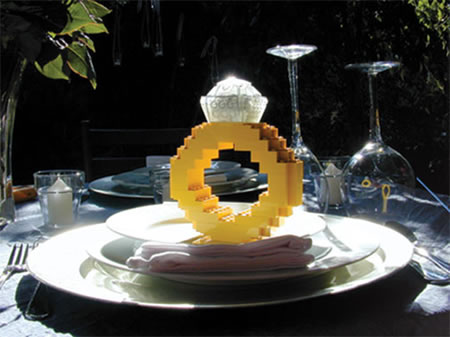 How typical. One dude who is crazy about Lego proposed to his wife in such a very not wow manner. I mean it’s typical. Different, yes, but still typical. He made a ring shaped in the form of a diamond ring and placed it over her plate. Inside the transparent brick stone there was the actual diamond ring… thankfully! Ryan Wood then proposed to his then girlfriend Katie. This was in 2006 though. He just put up the pictures online now. Weird isn’t it, after nearly four years? Imagine if he had lost that ring inside the Lego brick, it would have been a sight. Women don’t like to be standing awed and not having what she expected for. What if he was a fan of the sea monster lochness? Heh.
[Gizmodo]