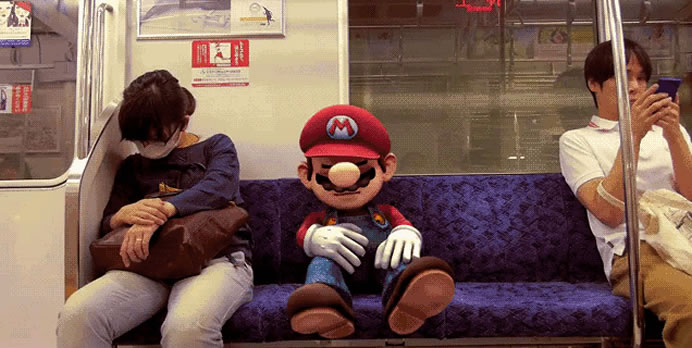 What if video game characters come to life? We’d like to share a drink with Max Payne or go car-jacking with Tommy Vercetti. But that’s just a far-fetched dream for now. In an attempt to give life to our imagination, Japan-based visual effects artist Dean Wright recently unleashed a darned cool video that features Mario, from the legendary Super Mario Bros. series, in real life Japan! The video begins with the plumber looking for plumbing accessories, instead of the princess. As the video proceeds, Mario is seen running around Japan’s street, clad in his iconic hat and with his gloves slipped on.

Unlike most real life videos with animated characters, this one’s actually quite fabulous. Watching Mario dozing off in a Japanese metro train made us chuckle for a few good minutes too. The video got us thinking about a television series in the future, or perhaps even a big Hollywood movie, featuring Mario, looking for his princess in the real world. Hell, he could eat a few mushrooms too! For now however, all we get is a minute-long video with the good ol’ character doing what most of us do, living a simple urban life.