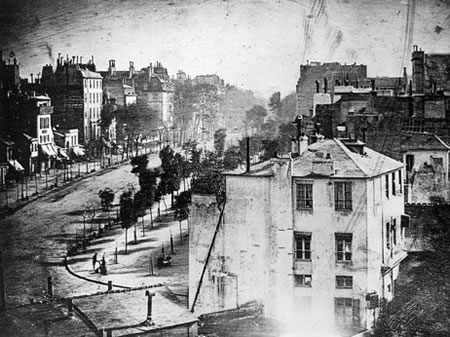 Man Having Shoes Shined is First Human Captured on Camera

This rather scratchy image is being heralded as the first possible photograph of a human. Supposedly taken in 1838 by Louis Daguerre, the inventor of daguerreotype photography, you can quite clearly see a tiny little man in the left-hand corner of the Boulevard du Temple in Paris. Nowadays our pictures are populated by people – friends, family and randoms snapped in varying degrees of sobriety, but the reason this is picture is so spectacular is that the technology at the time made it virtually impossible to snap a human unless they stood utterly still in the shot. To produce the shot, Daguerre would have had to expose a chemically treated metal plate for ten minutes. Which poses the question – what was the chap doing, standing so very still for that long? Having his shoes shined maybe, or pondering the wonders of existence?

Look close enough and it seems that the shoe-shining option is correct answer.
[Gearlog]