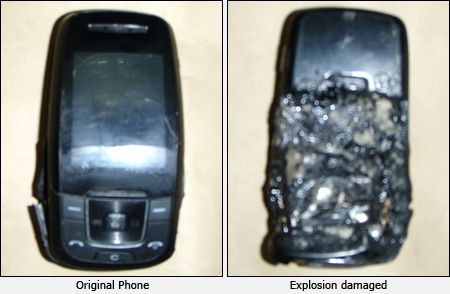 Man dies after phone explodes in his pocket

A 33-year-old excavator driver was found dead on Wednesday in Cheongwon, North Chungcheong Province in Korea. The man, identified only with his surname Seo, was found lying dead beside his excavator in a stone quarry in Cheongwon at 8:40 a.m. by his colleagues. His cell phone was found in his shirt pocket with its battery severely melted and his chest burned and fractured, the police said. The company who made the phone has been kept a secret however by looking at the picture it looks like a Samsung. Doctors said that the explosion killed the man and was declared dead on arrival. A similar accident killed a welder in June in China’s Gansu Province.
(Check out what the company has to say after the jump)
Update – The phone was manufactured by LG Electronics and not Samsung Mobile

“We will fully cooperate with the police investigation,” an official of the electronics company said. “But we believe that the battery was very unlikely to explode. Our battery is wrapped in aluminum foil, so when there is an external shock, it should just melt, not explode.”
Source (Korean)