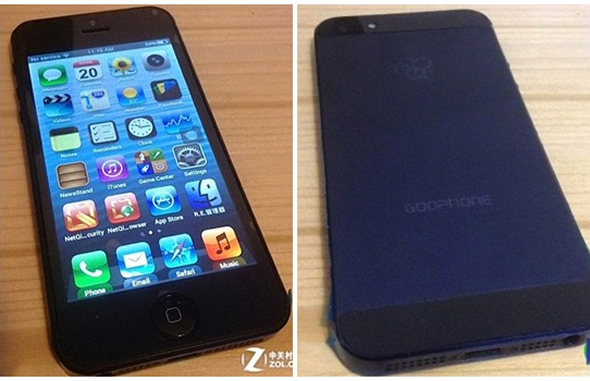 China made knockoffs are very common, a little too common to digest sometimes. Be it a Beats headphone or some Apple product, sometimes an expert eye is needed to differentiate it from the real thing. But ever heard of a knockoff even before its real version is announced? Enter Goophone, a Chinese company that has a tradition of making facsimiles, sometimes even before the originals are launched. This time they have come-up with a knockoff of iPhone 5s, say what? A phone which hasn’t witnessed any substantial rumours as of yet, believe it or not, the first 1000 units of its knockoff with an introductory price of US$99 already sold-out within minutes. Goophone has named the device ‘i5S’ and it looks quite similar to iPhone 5.


It runs Android 4.1 Jelly Bean with customized UI to make it look like iOS, users get the choice to switch between stock Android and the rip-off skin. Inside the body however it’s got rather humble specs – Mediatek’s 1GHz MT6577 processor with only 512MB RAM, and it has a 4-inch display with similar aspect ratio as iPhone 5, but resolution only at 854×480 pixel, no Retina display. It has 8GB on-board storage, 5MP back camera and 1.3MP front facing camera. Given that the device which is now priced at US$149, can’t ask the device to be more loaded. The hands-on video might surprise you how smooth the device run even with its poor specs. It can be used like a toy or a good iPhone knockoff, but not a substitute of the ‘real thing.’