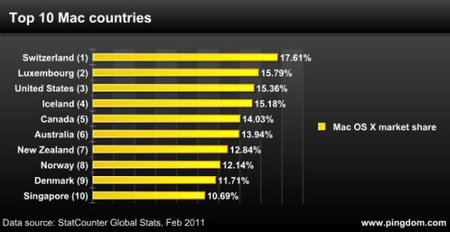 Just in case you’re trying to decipher the cryptic text we wrote above,then here it is: according to StatCounter (all based on solid sample of 3 million websites) states that Switzerland is the most Mac country in the world. Not only does the country has the maximum number of Apple Store, it also has a 17.61 percent market share of OS X, making Switzerland the country with the highest share on the planet.

Luxembourg follows next, and United States is third with 15.36 percent share. Now if you are wondering what’s the least Mac-savvy region, then its South America with a mere 1.08 percent share.
Now you know where you can find your Mac Buddy in.