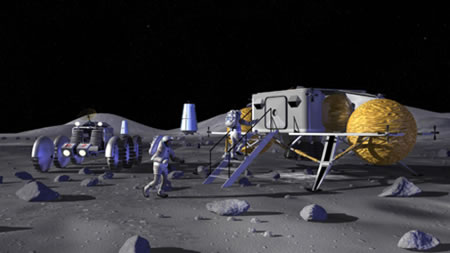 When God wanted to rebuild Earth he asked Noah to build an Ark to save the species. Now he’s whispered to NASA to do something when he decides to rid the filth and scum again. But the twist in the tale is that there is no Ark planned on earth but hopefully a Lunar Ark is on the cards. On their part NASA already has created blueprints of a permanent lunar outpost which will be probably ready by the 2020s. Jim Burke of International Space University (ISU) in France feels “that the plans should include a way to preserve humanity’s learning, culture, and technology if Earth is hit by a doomsday asteroid or comet.” In short, there is growing concern about the fate of earth if it gets struck by a meteor or comet and ends our civilizations.

NASA recently launched Phoenix Mars Lander that carried a mini-disc inscribed with stories, art, and music about Mars. The International Space University team is now on a more ambitious mission: to start building a “lunar biological and historical archive,” initially through robotic landings on the moon. The founders of the group Alliance to Rescue Civilization (ARC) say “In the event of a global catastrophe, the ARC facilities will be prepared to reintroduce lost technology, art, history, crops, livestock, and, if necessary, even human beings to the Earth,”
Source