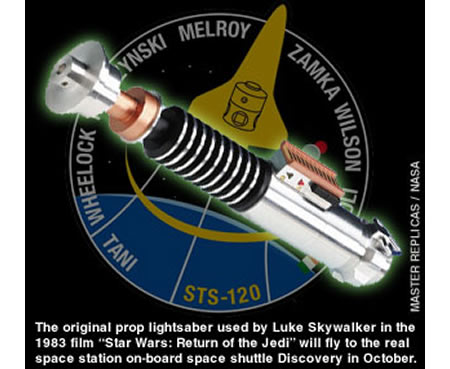 Luke’s lightsaber will be aboard NASA’s shuttle

The space shuttle Discovery is all set to launch the STS-120 crew in October. Along with a new module for the international space station, the craft will also carry the original prop lightsaber used by actor Mark Hamill as Luke Skywalker in the 1983 movie “Star Wars, Episode VI: Return to the Jedi”. To commemorate the 30th anniversary of the George Lucas-created franchise, an elaborate ceremony is being organized. The lightsaber flies first to Houston, Texas, (home of NASA’s Johnson Space Center), by way of Southwest Airlines and a Star Wars-studded send off ensues from Oakland International Airport in California. The lightsaber was handed over to Roger Bornstein, the space center’s director of marketing by Chewbacca. He then took it to Texas where he was met by R2-D2, Darth Vader, and was flanked by Stormtroopers. 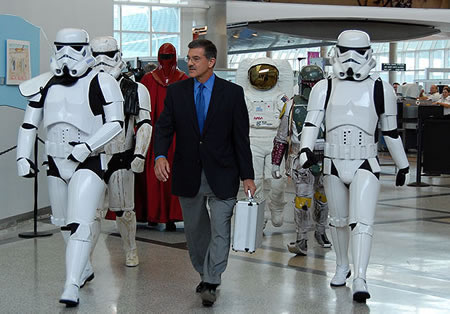 After the lightsaber logs over six million miles in space and returns from orbit on the shuttle Discovery’s STS-120 mission targeted for October, the lightsaber will be on display at Space Center Houston and then returned to Lucasfilm.
“We got our first impression of space exploration walking out of a movie theater late one night having just seen Star Wars. We looked up into the night sky and wondered about the possibility of that galaxy far, far away,” said Bornstein, explaining the connection between the NASA communities and the men and women behind the movie. “Likewise, for many of the visionaries at Lucasfilm, I am told they were first inspired by the numerous far reaching missions of NASA,” continued Bornstein. “So, it just seems natural that we are here today and together to launch a special mission to celebrate the 30th anniversary of Star Wars.”
Source 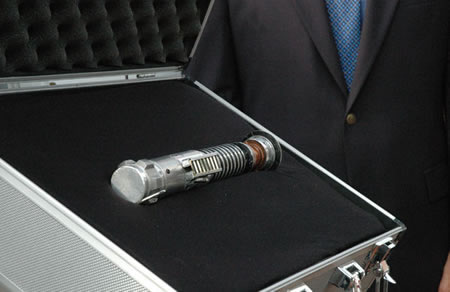