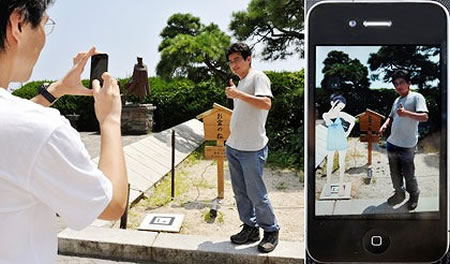 The traditional Japanese hot spring town of Atami is on otaku alert following an influx of techno nerds on summer vacation with their virtual girlfriends. Thanks to a Love Plus campaign by Konami Digital Entertainment, the increasingly sleepy holiday town has received a new injection of tourist life, with more than 200 male visitors coming to visit and stay with imaginary sweethearts. Love Plus is a dating sim for handheld Nintendo DS consoles and AR applications on iPhones. Marketed as an “open-ended communication game” Love Plus uses basic voice recognition software and a screen clock that fools players into thinking they are spending quality time with a real girlfriend. Pouring off the bus in Atami, groups of boys head for a black and white square – a 2D barcode – that uses “augmented reality” software to bring their darling of choice to life for a few photos. There are 13 such locations where the lads can magic up their virtual girlfriends, throughout Atami. At the Ohnoya Hotel they can even stay in rooms with barcode panels that allow them to visualise and even kiss their ladies, but nothing more kinky. And the boys had better be sure to pay their girl enough attention because just like a regular chick, a Love Plus girl can get moody if she has reason to doubt your commitment.

Since the campaign started in July, more than 200 Love Plus fans have stayed at the Ohnoya Hotel and more than 2,000 geeks from Japan, South Korea and Taiwan have visited the resort town.
[ChannelNewsAsia]