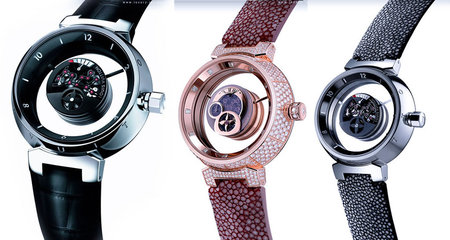 Banking on timepieces is a good hobby if you have the flame of hope that you can sell them sometime in the future for a higher price, as an antique. But if you decide to spend a bomb on this Louis Vuitton Tambour Mysterieuse Calibre LV115 watch with this in mind then you better think twice. It uses two transparent, sapphire disks support the hour and minute hands that are so invisible that it gives the illusion of the central portion of the watch to be floating. It also has its share of gold and silver along with 115 hand-mounted parts. It works on a winding mechanism. One winding runs the watch for 8 days straight.

And finally, the reason that makes us raise our eyebrows, the Louis Vuitton Tambour Mysterieuse Calibre LV115 watch costs $265,000! Yeah, they allow you to customize the design of the watch and the casing but still, is it worth it?
[Dvice]