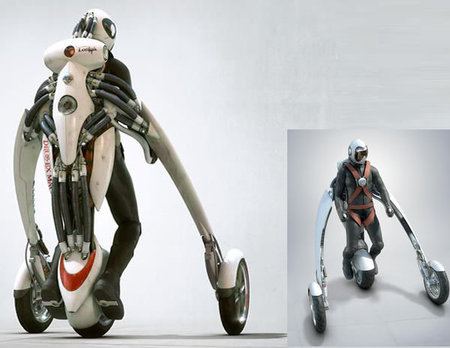 Look out Segway, the Deus Ex Machina could be the next best thing in compact personal transport

As an avid cartoon watching, comic book reading fan, I remember those old cartoon called the Centurions. These guys wore these funky suits with holes in them that could have all sorts of cool weapons and vehicle attachments teleported on. Then there’s always Iron Man’s suit of armor that would be so awesome if it came to personal travel. With that in mind, it seems like my dreams are becoming a reality thanks to the Art Center College of Design’s Jake Loniak’s exoskeleton motorcycle concept called the Deus Ex Machina. It’s a wearable system that riders can strap on like a body suite. Using 36 pneumatic muscles and powered by lithium-ion batteries and ultracapacitors this strap on bike is capable of traveling up to 75 mph. It’s not yet a working model but the designer believes it’s quite feasible. The Deus could be the clean-fuel personal mobile of the future and could render the Segway to be no more than a kids toy.