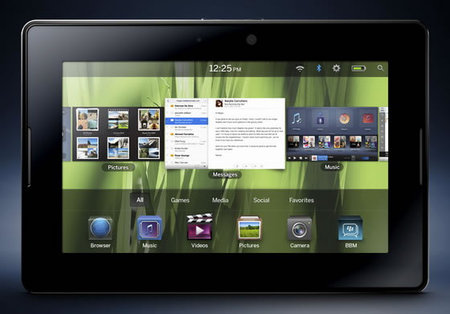 Look out iPad, the BlackBerry PlayBook Tablet is here and is loaded to the hilt

At this years BlackBerry Developer Conference, RIM brought out the big guns. Well it was a little bigger than their biggest phone. RIM’s Tablet that’s been called the PlayBook was finally made official. I find the name rather odd and I believe others will too, from a company that’s been focused for many years on the business sector to release a device they call ‘Play’ Book is a little strange. Then again if you think about it, all the new devices, including OS 6 have taken on a whole new funky look and feel. Gone are the days RIM was known as the Businessman’s brand. So back to the tablet – it’s got a 7-inch screen (1024 x 600 pixels), 1 GHz dual-core processor with 1 GB of RAM, comes with Adobe Flash 10.1, has a 3MP came in front and a 5MP camera with HD recording (1080p) at the rear, is Wi-Fi capable (DLNA support) and is just 9.7 millimeters thin weighing in at 0.9 pounds.

This baby’s even got HDMI (micro) support and Bluetooth. RIM also plans on introducing a 4G model when they officially launch the device next year. As of the OS, OS 6 is out a system developed by QNX Software Systems is in. What I didn’t see is a mention of USB slots and external memory support. It’s designed to offer users a better gamming experience and of course apps will also be available for download specifically for this. For now, the price is still under wraps. If Apple doesn’t get its act to together, they could loose out to the PlayBook, unless we see some other device take center stage in the first half of next year. 2011 is looking impressive so far. 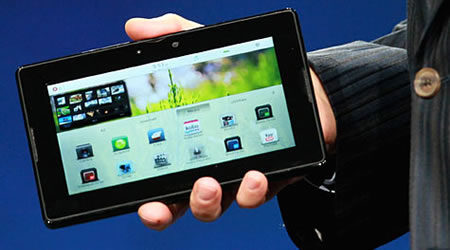