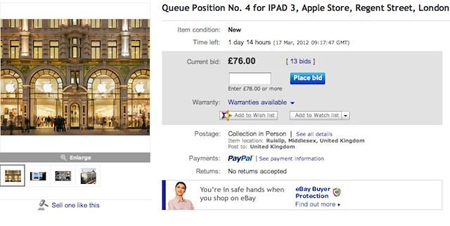 We have seen a hell of lot of stuff making it to auction tables. Apple had put in a place a new system to deal with enthusiasts lining up for their gadgets outside their stores. Somebody on eBay has actually put up their position in the queue at the Regent Street Apple Store in London for auction. The current bid for the 4th position stands at around USD$120 where 13 folks have showed their interest already. There are still some hours left before the new iPad finally goes on sale so you can expect the figure to touch sky-heights shortly. So if you are someone close to even trading your kidney for an iPad, then I’d say you better take this course of action.